Fat Rascal Theatre’s acclaimed parody pantomime Beauty and the Beast (known on social media as ‘SheBeast’) returns to the King’s Head Theatre for another year of satire, singing about eggs, and asking not to be sued by Disney.

Well-known for their Edinburgh Fringe hits Buzz and Vulvarine, Fat Rascal are experts at making musical theatre which is feminist, satirical, and seeping in pop culture and musical references – and this show is no exception.

The musical follows the same premise as the Disney classic, though the genders are swapped – we meet small provincial town Beau (Jamie Mawson) as he becomes trapped in the Beast’s (Robyn Grant) castle, becoming friends with ClockFace (Katie Wells), Lumie (Allie Munro), and Mr Spout (Aaron Dart). Switching genders of the roles not only adds to the parody, but inserts a deeper political point (something Fat Rascal consistently do with their productions). Grant’s Beast, for example, talks about being a ‘hairy girl’, and Grant mentions in her programme note that growing up, she was “starved for a female role model who could be described as something other than beautiful”. Here, in this show, the character of Beast is exactly that – a woman who is kind, intelligent, and funny under all of the fur.

Of course, it wouldn’t be a musical without songs, and these ones are hilarious. Created by Grant, Daniel Elliot (Lyrics) and James Ringer-Beck (Music), they are clever parodies of the classics we know and love. ‘Be Our Guest’ is transformed into ‘Have a Brunch’ – a satire of millenial dining in which the talking dinnerware sing about bottomless Prosecco and avocado in toast. The song possible contains my favourite line in the show: ‘I have a feeling her might like the Darjeeling’, sung by Mr Spout. The slow dance ‘Beauty and the Beast’ is also full of witty lyrics. Unfortunately, some of the lyrics are missed due to a combination of fast delivery and a loud sound system.

Alongside the fairytale retelling are some brilliant moments of comedy. There are quick one-liners and dirty jokes a-plenty, and the comic timing of Allie Munro and Katie Wells in their roles of Le Fou Fou  and Siobhan (a gender-switched Le Fou and Gaston) leave me in stitches. Wells struts around the stage like a contestant from Love Island, firing vulgar one liners left, right and centre whilst Munro’s infatuated Le Fou Fou stumbles and stutters around the stage. There’s a particularly funny moment where Munro’s two characters – Le Fou Fou and Beau’s mother Maureen – are in the same scene. Munro’s control and swapping between is excellent and a highlight of the show.

From the allusions to Disney film opening credits, to the Beauxbatons-esque cloaks and a storyline for the character who sings ‘I need – six eggs!’, Fat Rascal’s Beauty and the Beast is a wonderful romp through a Disney classic Featuring outstanding comic performances and a myriad of pop culture references, it’s certainly not one to be missed. Following its run at the King’s Head, the show will be touring, so grab tickets if you can. 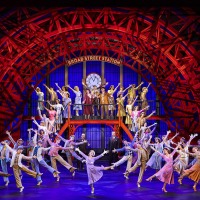