Hey gang! I did a video of this tag a year or so ago on my  (currently) inactive YouTube channel, but thought I would do it again for my blog, as it fits very well with what I talk about…and I love Shakespeare (my blog name comes from a Shakespeare quote). I am by no means an expert and still have MANY of his plays to read and see…so maybe we’ll check in every year or so to see if my opinions change?

Have you been in any Shakespeare productions?

Why, yes. Yes I have. I was Peaseblossom in a musical adaptation of AMND when I was 10, I played Beatrice in a modern musical adaptation of Much Ado when I was 11, I was Feste in Twelfth Night when I was 16, and I recently played Hermia/Puck/Starvelling in Dream again this year, which you can read all about here! I’ve also performed Katherina’s speech from The Taming of the Shrew for A-Level and used Viola’s speech from Twelfth Night multiple times in auditions.
Performing in productions definitely increase my enjoyment of the plays a lot more, as you can see in the next questions, a lot of my answers are usually related to the plays I have been a part of theatrically.

The comedies are definitely the plays I know more of, and I flicker between them a lot when choosing a favourite. Right now I would say Much Ado About Nothing. I love the wit between Beatrice and Benedick, the silliness of Dogberry and Virgil, and the darkness Don John brings to the play. I just think it’s beautiful. I also quite like Branagh’s film adaptation starring Emma Thompson. 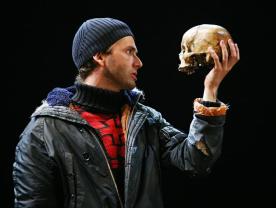 Probably Hamlet. Stereotypical, I know, but after studying it last year at uni and reading a lot of different interpretations of it, I’ve grown to love it even more. There are some really interesting lines, and through studying the play I’ve learnt a lot about Elizabethan culture, too. Also, David Tennant as Hamlet might have swayed me…just a little bit.

Without a doubt, the 1999 teen rom-com ‘Ten Things I Hate About You’ starring Heath Ledger and Julia Stiles. It’s an adaptation of The Taming of the Shrew, and I love what they’ve done with it. I absolutely adore the characterisation of Kat as a full-out Sylvia Plath-reading feminist with some damn good lines, and Heath Ledger singing is adorable. Of course, with this adaptation they had to make it more of a love story than the outright sexism that’s in the play, but I can forgive them for that. If for some reason you haven’t seen this absolute perfection of a film with young Joseph Gordon-Levitt in, then here’s the trailer:

Perhaps not my favourite, but as I am trying hard not to favour one play over another, I am going to say Helena from A Midsummer Night’s Dream. I really love her first big speech “How happy some o’er other some can be”, and the complexity of her as a character; she’s very interesting to watch and read. I don’t agree with any of her actions, and she annoys me no end, but I think the majority of us have been in her emotional situation at some point in our life. She’s my favourite of the four lovers, and the best to try and analyse – she has some cracking lines. 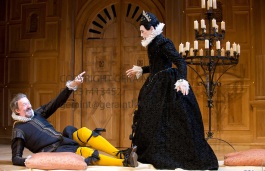 Malvolio from Twelfth Night always has me chuckling, particularly the scene with his yellow stockings! That scene just always gets me, and at A-level I did a lot of analysis about his actions and relation to religion which I found super super interesting (if you fancy a blog post full of analysis on Twelfth Night then let me know!). Stephen Fry’s portrayal of Malvolio opposite Mark Rylance’s Olivia is a perfect introduction if you don’t know the play.

I only have to choose between Viola and Rosalind as they’re the only ones I know, and I am going to have to choose Viola (also from Twelfth Night) just because I have spent more time with her? There’s no more than that, really. I just think she’s quite clever in the way she handles things: “I am all the daughters of my fathers house…” and she has very good intentions. Her gender role is also very interesting to analyse, as we never see her in her “women’s weeds” at the end of the play, suggesting she continues this cross-dressing facade for Orsino’s pleasure, as he knows and likes him best as Cesario rather than this famed Viola.

Though I love the beautifully poetic way that Gertrude describes Ophelia’s death, I am going to have to give this one to Mercutio (Romeo&Juliet). His death is such a significant turning point and when you realise that the play has truly turned from romance to war, as it’s not just Montagues and Capulets dying, but innocent outsider Mercutio gets slayed, also. His final words, “a plague upon both your houses” are prophetic, and always stand out to me, especially as they are delivered so seriously. In this moment, we see Mercutio change from the fun-loving joker we know him as to a dark shadow, a force even, who hangs over Romeo and almost dictates what happens in the rest of the play from then on. I particularly love Baz Luhramann’s direction of this in his 1996 film adaptation (yes, that one), with all of the dark clouds looming (pathetic fallacy is so GCSE-level lol) and the reveal of Mercutio’s “scratch”.

I like, love, adore Beatrice and Benedick from Much Ado About Nothing. Gosh, so much. I love the wit they share between them and that they are on an equal standing in their intelligence and the way they are presented. They’re both slightly older than Romeo and Juliet so I feel it is a muc

h more realistic romance to watch unfold. It’s the kind of love we’ve all experienced at some point – the bickering, not wanting to admit you both like each other, but eventually falling. I love their development throughout the play, especially on Benedick’s behalf as he realises he must fight for Beatrice and what is right by killing Claudio (spoiler:he doesn’t actually but that’s okay). Beatrice is definitely a woman I’d like to be, too.

I’ve toyed with this question but I think I’ve concluded that it’s Richard II’s speech “let us sit upon the ground /and tell sad stories of the death of kings” which takes place in III.II. I think the language is beautiful and has some incredibly powerful imagery, such as the infamous “hollow crown”. It is exquisite to listen to, as is his speech from the deposition scene.

I’m also going to try and pick from plays I’ve never done, too. I think Ophelia would be a challenging character to play, particularly if it was in a contemporary setting. But I think I’d like to play any of the three daughters from King Lear. I don’t know an awful lot about the play other than key points, but I do love playing a nasty character! I think playing either Regan or Goneril especially would be a wonderful opportunity and wicked fun.

I have a couple!
“All that glisters is not gold” – The Merchant of Venice
“Better a witty fool than a foolish wit” – Twelfth Night

‘O Mistress Mine’, which Feste sings in Twelfth Night. I love this version Ben Kingsley sings in the 1996 film:

So, that was the tag! I think I’m going to check up on this and do new versions every year or so, as I read and see even more of his stuff. If you’d like to read any of my Shakespeare-related posts, here’s a list!

Should Shakespeare’s plays be cast gender-blind?
Globe 2016 – A Midsummer Night’s Dream review
Globe 2016 – The Taming of the Shrew review
Iris Theatre’s Much Ado About Nothing review
British Library  Shakespeare in Ten Acts exhibition