Matilda is a show that has been on my wishlist of shows to see for a long time. I’m ashamed I hadn’t seen it earlier! I devoured the book as a child, many of my friends had been and given it rave reviews, and I have listened to the soundtrack more times than I care to admit. In fact, I am listening to it as I write (My Mummy says I’m a miracle…)

So, I finally went.

I woke up at 6:30am in order to get to the Cambridge Theatre early enough to join the day-seating queue. As I was accompanied by my lovely stagey friends Conor, Katy, and Jamie, the time passed quickly and it was soon 10AM – when the box office opens.
The Cambridge Theatre runs an amazing scheme where they have 16 day-seat tickets for 16-25 year olds at £5.

FIVE POUNDS FOR A FIVE STAR MUSICAL. Who could argue with that?

So we purchased four tickets for the matinee performance (Wednesday 7th September) and had some fun perfecting our #MatildaPose before coming back for the show. 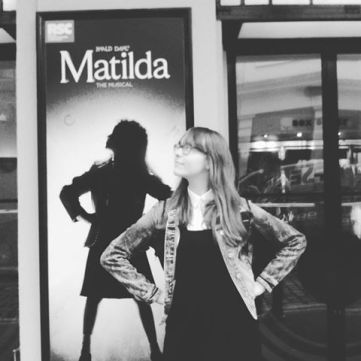 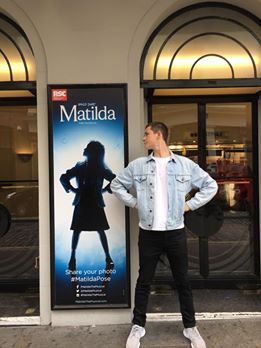 The day-seats are situated in the upper circle (the top tier of the theatre) and are quite far back. However, despite the fact our tickets said they were “restricted view” seats, I saw everything perfectly! There was a bar in front of our seats but it was easy to look over (we were seats J25-28 for anyone interested).

I want to commend the theatre and set designers for creating one of the most fantastic sets I have ever seen. As you step into the theatre, you are immediately transported into Roald Dahl’s world. The walls are lined with the alphabet, and quotes from the show with colourful backgrounds in the iconic chalkboard script.The set is bordered with colourful blocks of letters (if I have children their room will be decorated like this), and the school desks rise up from the stage floor effortlessly. From just looking at the stage alone, you can tell that stories are a prominent part of the show. And indeed they are.

The music and lyrics devised by Tim Minchin keep Dahl’s childish imagination alive. The tunes get stuck in your head (and in a good way), and the lyrics are not only witty but very clever. From spelling the alphabet through words in School Song to the rebellious double meaning of Revolting (Children), you’ll want to listen to the soundtrack more than once to check the little nuances and clever word choices. There’s a lot of fast-paced talk-sung moments reminiscent of a tongue twister, but they are placed at such perfect moments they work so well in the quirky madness of the show. 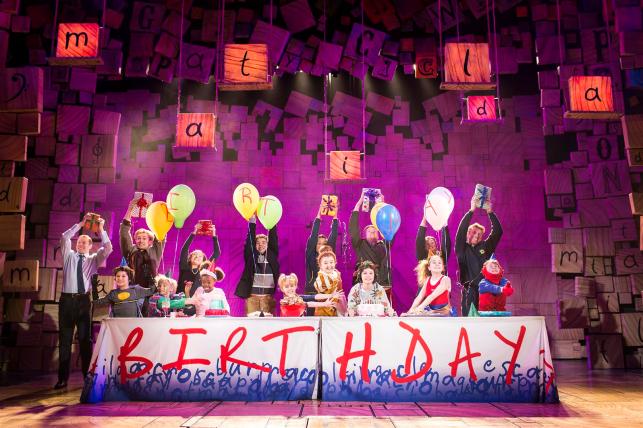 Along with this, the choreography has to be commended. Choreographer Peter Darling has said in interviews that he wanted the cast too move as if “in a cartoon”, and from the first number, Miracle, you can certainly see that, especially from the view we had. The children dance such simple steps, and very statically, and yet it looks so brilliant. They look as if they have stepped out of one of Quentin Blake’s illustrations. The staging of the numbers also is excellent and makes use of many child-like settings. The opening number uses balloons to accentuate the horrible-ness of the children, and the standout number for me, When I Grow Up, uses swings and a slide effectively.
One of my only issues with the musical numbers is the opening number of the second act, Telly, which is sung my Mr Wormwood (accompanied by his son Michael). Though performed well, it seems to fall flat as an opening number compared to When I Grow Up, which comes after it. Though fun, it’s quite low-key, and doesn’t add much to the plot. I also wonder whether, as the show continues, whether we’ll have to exchange “telly” for a laptop, mobile phone, or the internet? But that’s a debate for another time. 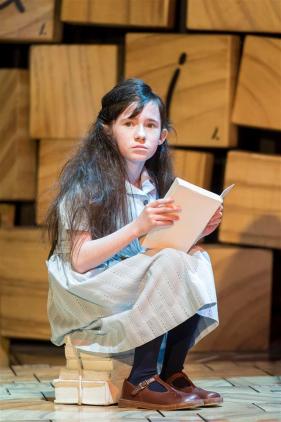 Regardless, the cast were absolutely fantastic. Clara Read, our Matilda, was adorable, sparky, and incredibly talented. You definitely rooted for her and she owned her solo numbers Naughty and Quiet.  The entirety of the child cast were phenomenal, as always, working so well together in their big numbers, and their final song, Revolting Children, had me clapping along and wishing for more from them, despite how much they had already done.
Unfortunately, Mrs Wormwood (Rebecca Thornhill), though marvellously acted, sounded as if she needed vocal rest.
However, there were understudies for both Miss Honey (Charlotte Scott) and Miss Trunchball (Oliver Brooks) but I would have never known the difference! Scott’s voice was absolutely beautiful and her song “My House” had me in tears. Brooks, as Trunchball, was hilarious, and a force to be reckoned with.

Overall, I had a wonderful afternoon watching Matilda, and I am SURE I will be back soon, especially at that price!

For more info on how to get cheap theatre tickets – check out my post! 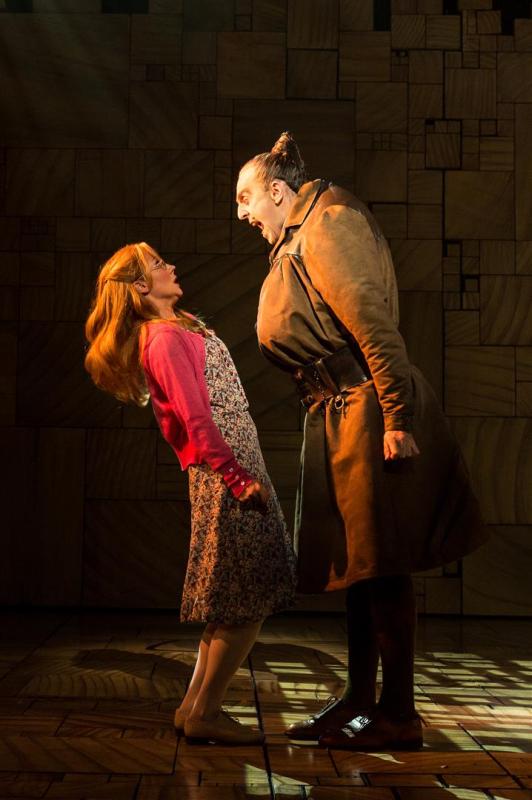 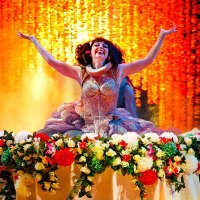 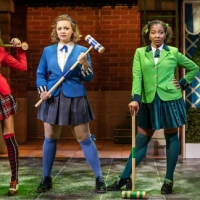 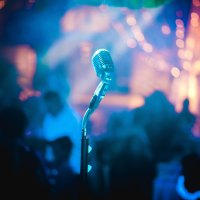