I’ve never been to Wales before, and so of course whilst I was visiting one of my best friends, Seren, I HAD to check out what shows were on. Luckily the Cardiff Open Air Theatre Festival had started the weekend I visited, and so Seren and I made sure we bought tickets to first show of the month long festival: Into the Woods.

The Festival has been running for over twenty years in Cardiff and is a large tourist attraction, with thousands of visitors every year. For the last few years it has been in Sophia Gardens, and this is an absolutely beautiful location for the shows, especially this one. It is open, very pretty, and we were lucky enough to have lovely weather.

This was my first time seeing Into the Woods performed, and being an avid lover of both the Broadway Cast Recording and 2014 film, I was very excited. Of course, I was not disappointed. The entire show was incredibly well cast, with each actor having their own moment (or several) to shine and working very well as an ensemble, particularly in the opening number and the “summary” songs at the end of each midnight.

With such a large cast, it is very difficult to mention specific people, but I will say a few who particularly stood out to me. Both Matt Preece and Laura Phillips as the childless baker and his wife had wonderful chemistry shown particularly in “It Takes Two”, and Phillips showing off her beuatiful voice in her solo “Moments in the Wood”. James Rockey as Jack delivered his solo well with great storytelling, and his mother (Sarah Bawler) was funny and full of life. One of my favourite characters, Little Red Riding Hood (Dracy Welch), was a standout to me. Perfectly cast, Welch was cheeky and child-like with some brilliant facial expressions. The scene with her and the Wolf (David Stephens) was a delight to watch. Additionally, any time the two princes (Lewis Cook and Tom Elliot) entered, I knew I was in for a giggle. Their highly stylised characters and performance of “Agony” were hilarious.

The style of the show, also, must be commended, keeping the costumes and set to natural tones and colours to fit the Woods – though a story of fairytales, nothing was made too splendid: reality and the truth of wishes was the focus. The set was also well-designed, a static setting with different heights and stairs, a great symbol for the many pathways in the woods as well as helping to place the different towers, castles, and houses across the stage.

The atmosphere of the show itself was very friendly (I found that Welsh people are so), and as it was a matinee, there were a lot of children and families present, and this show is something that is definitely for every one, with one of the main themes being parenthood. However, I did notice that a few families left at the interval – perhaps the parents wanted to protect their children from the sad and bad of the second act? There were some additions and alterations to the script, such as an EU Referendum joke and some Welsh language. Though in the script, there was a very nice meta-theatrical moment where the Narrator (Neil Parker) himself got sucked into the story which was very comical. 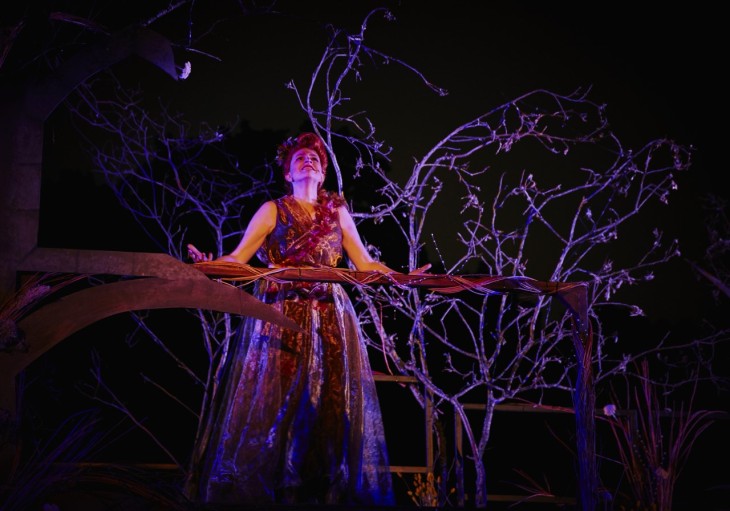 The Director and Musical Director  have to be highly commended for successfully putting on such a difficult show. With a large cast, lots of tricky songs, and a sometimes-difficult plot to follow, they managed to make it look easy. Also, the band were spectacular – it’s a long and music-heavy show, and there wasn’t a note out of tune.
What made the show even more spectacular was that this was not a professional show. The cast were all amateurs. I personally felt like I could be watching a West End-worthy performance.

The Cardiff Open Air Theatre Festival runs until July 30th. Three other shows (‘Allo ‘Allo, Romeo and Juliet, and Peter Pan Jr. will all be being performed). For more information, visit http://everymanfestival.co.uk/